We were hired by a national HVAC company to work on several systems they had installed at an assisted living development in Raleigh.  A noise issue was preventing the facility from selling an apartment which was located directly under some of the rooftop system.  The vibration from those systems was causing a resonance in the rooms below which was quite loud.

Jake went out and that day and was able to come up with a solution – we installed vibration pads under all of the offending units.  These pads provide a little flexibility and absorb some of the vibration.  The solution was effective and sound in the unit below decreased to almost inaudible levels – and the facility was able to sell that unit. 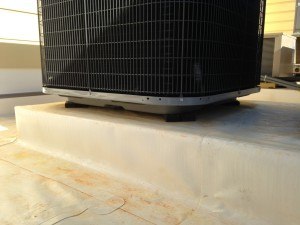 While he was there, Jake noticed one of the units was iced up, and another wasn’t working – it actually had never run. This was the first cooling season for the building so no one had noticed.  We found numerous problems dating back to construction including some miswired equipment, circuit breakers of the wrong amperage, refrigerant leaks, air handling units with wrong speed settings, and on and on.

We got everything straightened out, and it was a learning experience for us, and for the HVAC company that did the install.  We are most likely going to work with them on their next project to commission the equipment when it is first turned on.  This will let their people do what they are best at – building and installing the systems and equipment, and leave all the fussy, time consuming work of debugging the systems to us.

In general, it’s a good idea to have highly experienced technicians do the start-up of new systems.  They’ve seen, heard and felt just about every problem imaginable.  They will be able to shut down and fix the system before any lasting damage is done.  For the contractor that installed the systems, he can rest easy knowing warranty claims will be greatly reduced.  His customer won’t be calling him when equipment fails months or years down the road because of a problem that could have been found when a unit was commissioned.