We’ve been working on an interesting problem at a busy diner in Smithfield NC.  For a long time the restaurant has been very humid inside.  We are talking tropical, but with a dank smell inside.

We quickly figured out that when the restaurant was designed, the engineers specified AC units that were much too powerful for the building.  AC units dehumidify the air because moisture from the air condenses on as it passes over the cold evaporator coils.  However, in order to dehumidify properly the system has to run long enough for moisture to condense, drip down into the pan, and then run through the hose to the outside.  Once the system shuts down, the moisture that is still in the pan or on the evaporator coils can return into the building (especially if the thermostat is set to keep the fan running, rather than in auto mode).

Since the oversized system cools the restaurant down to its set point quickly, it does not remove as much humidity from the air before it shuts down.  So we needed to find a way to reduce the capacity of the AC system.  We first did a simple test to make sure this would help.

We installing a data logger which measured temperature and humidity every minute, and ran it for a week.  In the middle of that week we disconnected they Y2 output of one thermostat.  This effectively reduced the cooling capacity of that AC unit by half.  In the data you can see the relative humidity in the restaurant drop by about 7%, into the 65% range.  Not great, but an improvement, and enough to let us know that reducing the capacity of the system let the AC run longer, and dehumidify the restaurant better.

Working with the restaurants engineer, we found a way to reduce the capacity of the system only when necessary, without disabling the second stage of the cooling system.  We installed an APR Control Valve on all three AC machines in the restaurant.

The APR Control made by RAWAL Devices uses the temperature of the return air to adjust a valve, which bypasses some of the hot gas from the outlet of the compressor back to the inlet – so this amount of hot gas does not get cooled by the condenser, instead it is fed right back into the compressor.

This effectively increases the pressure at the inlet of the compressor – because all else being equal, hot gas will be at a higher pressure than cooler gas.  And with the pressure before the compressor being higher the compressor does not work as hard to compress the gas to its output pressure, and less work means less cooling capacity.

This was no easy project, the APR Control is fairly large and required 6 new connections to be made in the refrigerant circuit.  Richard went out to mock up the installation and sketch out all the connections, tees, valves and elbows that would be needed to fit the device inside the AC units. 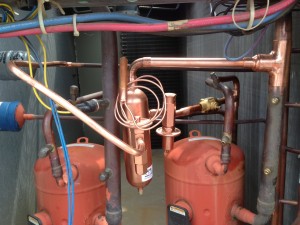 On game day, Richard and Chris worked 10 hours on the roof installing all three devices. With temperatures in the 90’s they only took one machine offline at a time, so that the restaurant would stay cool and with the advanced planning there were no surprises and everything went smoothly.

Within a day the humidity felt noticeably lower and now it is comfortably in the 50% range.