A Tricky Problem at a Large Steakhouse

A Tricky Problem at a Large Steakhouse

One of our customers has a room upstairs for private functions.  This room is open to below, and for the last year or two has been chronically warm, especially when a crowd of people is up there.  Our service manager Richard went with one of our technicians Jake to get to the bottom of this problem.  They noticed that the airflow in the room did not feel adequate.  The obvious stuff, changing filters and cleaning out returns had already been done.  Upon checking the HVAC units they found that the blower motors were not drawing as much current as they should. Each motor was drawing about 1 Amp less than it should.  One system was running at 3.3 amps when the motor was rated for 4.8 amps.  It turned out the culprit was worn pulleys. 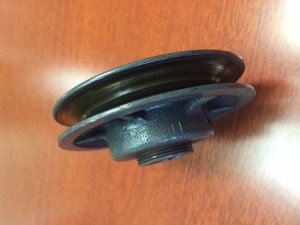 The pulleys on all four systems (which are about 8 years old) were worn to the point where the effective diameter was reduced.  This caused the belt to ride down into the groove deeper, and also caused the belt to not engage the pulley very well (causing belts to wear out quickly).  With the effective diameter of the pulleys reduced, the fan speed was reduced by a corresponding amount.  Once the pulleys were replaced and adjusted, we got all four fan motors running closer to rated load.  For instance the one that was running at 3.3 amps is now drawing 4.42 amps.

Inside the building you could feel the difference, and our customer is looking forward to having a nice cool room for private parties.